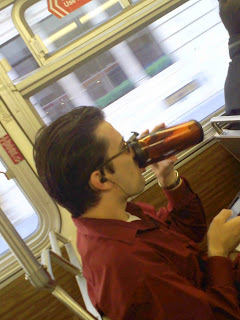 there's this guy i see on the bus riding to work with me on most mornings. he's a fairly normal looking guy; probably in his mid-30's, wears sunglasses most days, has dark hair that he keeps slicked back, average height, business-casual. a while ago i noticed he would often make strange/loud snorting and throat-clearing noises. not abnormal, but after he does it every 1-2 minutes on a 25 minute bus ride from 1 foot away from you, it starts getting on your nerves.

one of these morning as i was looking at him with disdain out of the corner of my eye i noticed that he kept bringing his hand to his mouth when he would do his cough/snort/clearing thing. i kind of assumed he was just being courteous and covering his mouth. a week or so later and we're on the same bus again, within feet of each other, and i'm seeing his whole routine from a different angle. it turns out he's not just covering his cough, this is what he's REALLY doing:

he puts his hand to his mouth as if he's holding a whistle that he's about to blow, then he makes his throat noises and spits some saliva or phlegm out of his mouth onto his lower lip, then quickly snatches it up with his thumb/index finger and proceeds to wipe it on the inside of his pants pocket. and he does this A LOT.
maybe he does have some strange medical condition that causes a crazy amount of mucous to build up in his throat... i dunno.. but it's fucking gross.
stupid/funny stories

ullysully said…
today marks the day i was first exposed to this mythical being. it will haunt me for life. he got off ON OUR STOP!!!