March 31, 2010
my friend paxton came by to pickup something that he left behind last time he was here. his bum leg has been acting up so i told him i'd just run it down to his car when he got here. he texted me when he arrived and i went down & hung out in his car for a few minutes, talking like a couple of gentlemen. i left the car door open while i sat talking about the state of his bum leg when i noticed some creepy dude staring at us from about 5 feet away at my 2 o'clock. it was kinda dark so i asked paxton "is this dude staring at us?", it took him a minute to find this sneaky fucker, as he was positioned behind a telephone pole. as paxton confirmed my query the creepy fella came over to the car.

he mumbled something like, "this is such a live neighborhood we live in" (his speech was pretty erratic, as was his stature) and how he's been here for four years and he plays percussion in a band. and apparently he lives just a few doors down from me. yay.

for a few seconds i just stared in awe, waiting for some more nonsense to come out of his mouth. then i said something to the effect of, "you havin' a good night there?". he didn't really acknowledge that i had said anything; then said that he just wanted to come over and talk to us and that, "i'm reeeaaal fucked up..".

that's about when he said, "you guys wanna come smoke some bubble hash at my place?". i think both paxton and i chuckled a bit and said no thanks... he then turned and ran away and looked back and yelled, "TOO BAD, IT'S YOUR CROTCH!!". (or at least that's what i thought he said). paxton clarified that he actually said, " TOO BAD, IT'S YOUR LOSS!!". oh, and as he scurried off i'm fairly positive i heard him making some bird-like screeching noises.

what the fuck is bubble hash?!?

UPDATE: after i left the dude came back & talked to paxton a bit more, and paxton got his name. and i found him on facebook. here's what he looks like, although i obscured his face to protect his identity. 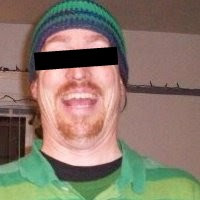