April 26, 2011
i bought a used scooter from craigslist about a month ago, i wanted one that had some battle damage, so i wouldn't care as much if i added some of my own. which i did. i had my first accident on friday, it wasn't too serious though. some european tourist made a left into the lane i was in, we collided, my scooter & i hit the ground and slid for maybe 10 feet. i landed on my ride side, so my hip on that side has been sore, but strangely my left shoulder has been REALLY hurting. anyway, i called my folks (it was easter) and told them about my accident, as i was getting off the phone my mom requested that i send her a picture of my scooter.
as i was going through my photos on my phone i came across this one & thought that they'd find it amusing. so i sent it, immediately followed by "just kidding", and then a real photo of me on my scooter (but for some reason only this image went through): 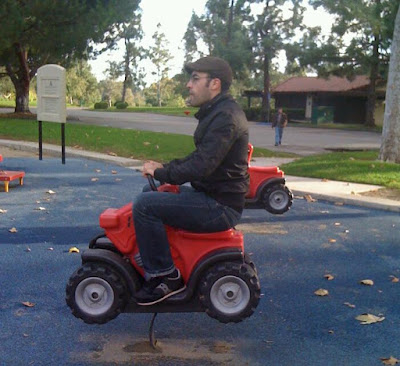 a few minutes later my father calls me back, pissed-off, yelling "what the hell is wrong with you?!?" and "you can't really be driving that on the street!?" and "are you sick in the head?!?". i started cackling and asked how many pictures they got from me...   he said "just the one...  why?"
it kind of blew my mind that they really thought that i was commuting to work on that.
in their defense, they're using an old-school flip-phone.
life updates stupid/funny stories

onlineprinterhelp said…
visit to our website for Hp printers help