December 17, 2008
it started out on an airplane, but it was more like a party plane... the lights were really dimmed and there was loud music and people cuttin it up on the dance floor. some guy had this crazy bright bird costume on and was doing some strange interpretive bird dance that the crowd was LOVING... also, each aisle on the plane had photos of the passengers over them, right under the overhead storage bin. strange. random.
next thing i know the plane starts a rapid descent, and it seems like we're flying over london. then the plane descends into a downtown area with skyscrapers and large apartment complexes. it seems like the pilot got confused and thought he was driving a car because he was actually flying down some roads (between buildings) for a while until the wings finally got knocked off. it wasn't a violent crash though, and everyone seemed OK.
by the time everyone staggered out of the plane it was already dark and we were right next to some really huge park. i couldn't find my phone which made me feel helpless, and the power was out in the area so it was pretty much pitch black. i teamed up with some random dude named josh and helped each other run through the forest. oh yea... there was some giant godzilla-sized monster in the city which we we're running from. as we ran through the forest i remember passing something that seemed to be making deep zombie-like moaning sounds, but since i couldn't see shit i just kept running (fudge monster).
next thing i know i'm in some building that the military is using as a staging area to plot their attack against the giant monster. meanwhile, the monster has broken apart into dozens of 10-foot tall fudge monsters...
they looked kinda like this:

and apparently the military decided the only way to destroy them was by freezing them. things started to get blurry here but i vaguely remember seeing some military plane fly by real low and it seemed like they let loose a bunch of creatures of their own to take on the fudge monsters. i remember the creatures looked like this guy from hellboy: 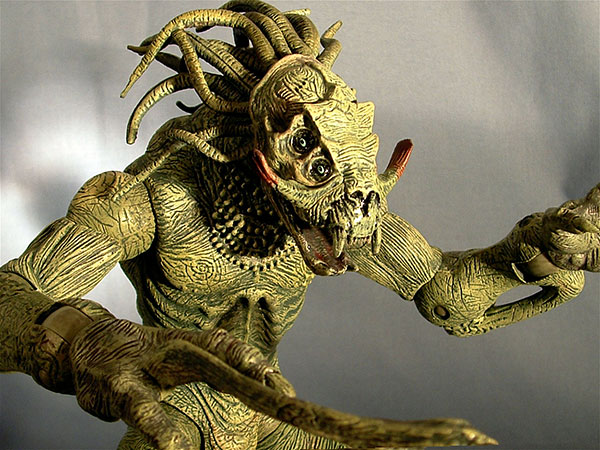 that's about when i woke up.
dreams